Home/Posts/SCIENCES/Discoveries/Amasia- World’s Next Supercontinent
Previous Next 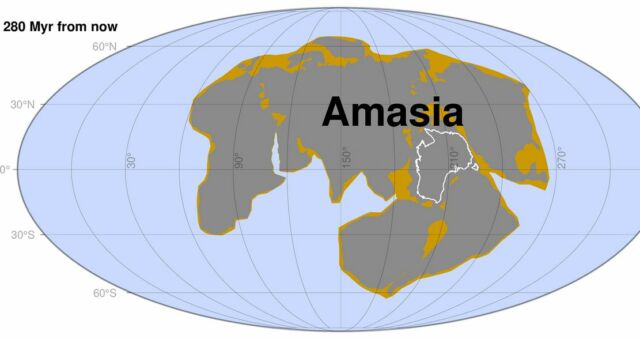 World’s next supercontinent, Amasia, will most likely form when the Pacific Ocean closes in 200 to 300 million years.

New Curtin University-led research team used a supercomputer to simulate how a supercontinent forms and found that because the Earth has been cooling for billions of years, the thickness and strength of the plates under the oceans reduce with time, making it difficult for the next supercontinent to assemble by closing the “young” oceans, such as the Atlantic or Indian oceans.

Lead author Dr Chuan Huang, from Curtin’s Earth Dynamics Research Group and the School of Earth and Planetary Sciences, said the new findings were significant and provided insights into what would happen to Earth in the next 200 million years.

“The resulting new supercontinent has already been named Amasia because some believe that the Pacific Ocean will close (as opposed to the Atlantic and Indian oceans) when America collides with Asia. Australia is also expected to play a role in this important Earth event, first colliding with Asia and then connecting America and Asia once the Pacific Ocean closes.

“By simulating how the Earth’s tectonic plates are expected to evolve using a supercomputer, we were able to show that in less than 300 million years’ time it is likely to be the Pacific Ocean that will close, allowing for the formation of Amasia, debunking some previous scientific theories.”