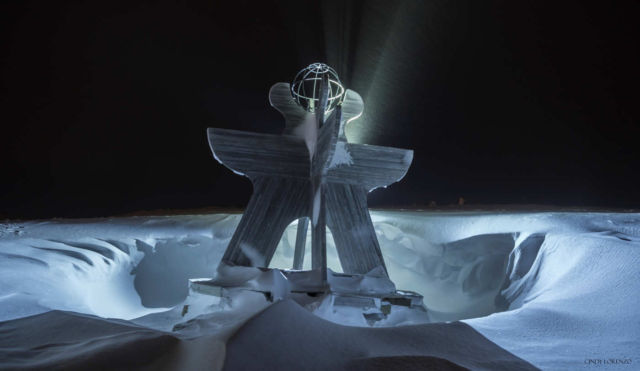 It was snapped during a snowstorm at 1:00 a.m. on December 8, 2017. Both the Arctic Circle and the Antarctic Circle straddle the Earth at 66.5622 degrees latitude. At the winter solstice, this latitude marks the polar night, the 24-hour period when the Sun is below the horizon, and at the summer solstice, it’s at the southern extremity of the 24-hour daylight period (Midnight Sun or Polar Day).

Though most lands through which this imaginary circle passes are remote and uninhabited, a number of towns and villages can be found near the circle. In several of these locations, Arctic Circle Monuments/Markers have been erected, primarily to attract tourists; some are even connected to cafeterias and gift shops. Note that not all of these monuments lie exactly on the Arctic Circle.