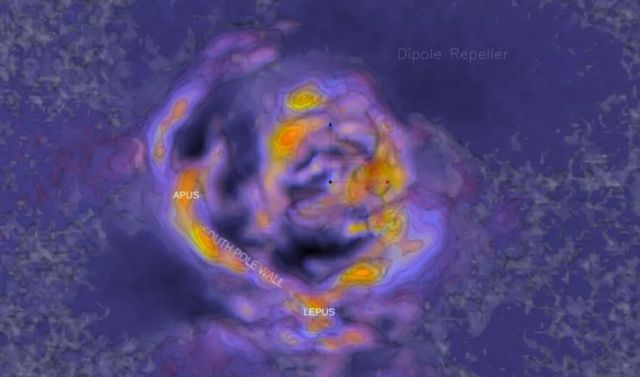 Scientists found hundreds of thousands of galaxies, by creating a 3D map of parts of the universe hidden by the Milky Way.

As it is known, ‘The South Pole Wall,’ is located approximately a half billion light-years away, consists of thousands of galaxies, of trillions of stars, as well as dust and gas.

The discovery was announced by Daniel Pomarède of Paris-Saclay University and R. Brent Tully and colleagues of the University of Hawaii in July 2020.

“One might wonder how such a large and not-so distant structure remained unnoticed. This is due to its location in a region of the sky that has not been completely surveyed, and where direct observations are hindered by foreground patches of galactic dust and clouds. We have found it thanks to its gravitational influence, imprinted in the velocities of a sample of galaxies.” 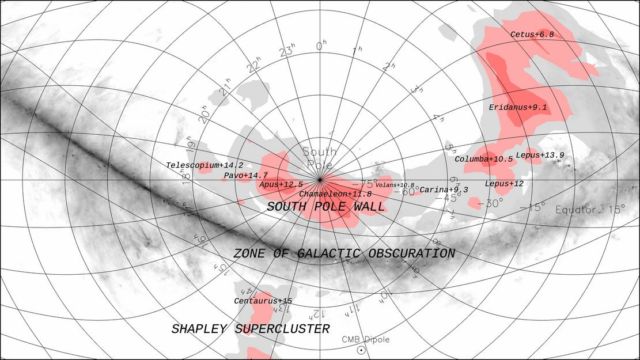 A projection of the South Pole Wall in celestial coordinates.  Credit Daniel Pomarède

According to astronomer Tully, “We wonder if the South Pole Wall is much bigger than what we see. What we have mapped stretches across the full domain of the region we have surveyed. We are early explorers of the cosmos, extending our maps into unknown territory.”

Also, according to the international team of astronomers that discovered the South Pole Wall, “We will not be certain of its full extent, nor whether it is unusual, until we map the universe on a significantly grander scale.”

Their findings are detailed in The Astrophysical Journal.