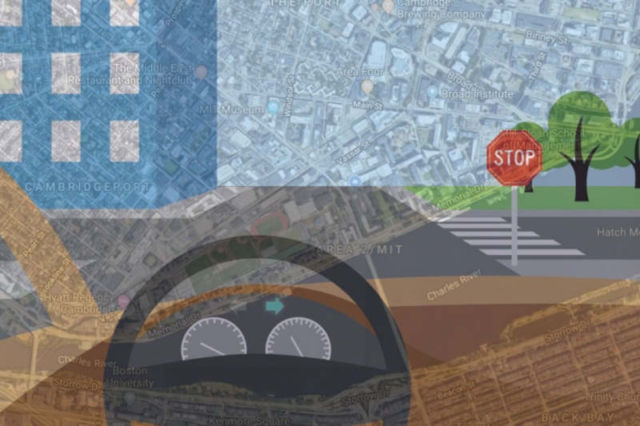 Scientists are teaching cars to navigate just like humans, using a simple map and visual data.

MIT researchers, with aims of bringing more human-like reasoning to autonomous vehicles, have created a system that uses only simple maps and visual data to enable driverless cars to navigate routes in new, complex environments.

Human drivers are exceptionally good at navigating roads they haven’t driven on before, using observation and simple tools. We simply match what we see around us to what we see on our GPS devices to determine where we are and where we need to go. Driverless cars, however, struggle with this basic reasoning. In every new area, the cars must first map and analyze all the new roads, which is very time consuming. The systems also rely on complex maps — usually generated by 3-D scans — which are computationally intensive to generate and process on the fly.

In a paper being presented at this week’s International Conference on Robotics and Automation, MIT researchers describe an autonomous control system that “learns” the steering patterns of human drivers as they navigate roads in a small area, using only data from video camera feeds and a simple GPS-like map. Then, the trained system can control a driverless car along a planned route in a brand-new area, by imitating the human driver.

Similarly to human drivers, the system also detects any mismatches between its map and features of the road. This helps the system determine if its position, sensors, or mapping are incorrect, in order to correct the car’s course.

To train the system initially, a human operator controlled an automated Toyota Prius — equipped with several cameras and a basic GPS navigation system — to collect data from local suburban streets including various road structures and obstacles. When deployed autonomously, the system successfully navigated the car along a preplanned path in a different forested area, designated for autonomous vehicle tests.

“With our system, you don’t need to train on every road beforehand,” says first author Alexander Amini, an MIT graduate student. “You can download a new map for the car to navigate through roads it has never seen before.”

“Our objective is to achieve autonomous navigation that is robust for driving in new environments,” adds co-author Daniela Rus, director of the Computer Science and Artificial Intelligence Laboratory (CSAIL) and the Andrew and Erna Viterbi Professor of Electrical Engineering and Computer Science. “For example, if we train an autonomous vehicle to drive in an urban setting such as the streets of Cambridge, the system should also be able to drive smoothly in the woods, even if that is an environment it has never seen before.”

Until now, however, these models were strictly designed to safely follow the road, without any real destination in mind. In the new paper, the researchers advanced their end-to-end system to drive from goal to destination, in a previously unseen environment. To do so, the researchers trained their system to predict a full probability distribution over all possible steering commands at any given instant while driving.