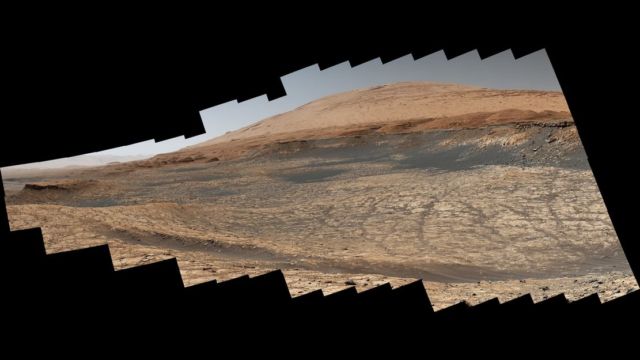 After more than a year in the “clay-bearing unit,” Curiosity is making a mile-long journey around some deep sand so that it can explore higher up Mount Sharp.​

Above: Curiosity’s Path to the ‘Sulfate-Bearing Unit’: Stitched together from 116 images, this view captured by NASA’s Curiosity Mars rover shows the path it will take in the summer of 2020 as it drives toward the next region it will be investigating, the “sulfate-bearing unit.” Credits: NASA/JPL-Caltech/MSSS

NASA’s Curiosity Mars rover has started a road trip that will continue through the summer across roughly a mile (1.6 kilometers) of terrain. By trip’s end, the rover will be able to ascend to the next section of the 3-mile-tall Martian (5-kilometer-tall) mountain it’s been exploring since 2014, searching for conditions that may have supported ancient microbial life.

Located on the floor of Gale Crater, Mount Sharp is composed of sedimentary layers that built up over time. Each layer helps tell the story about how Mars changed from being more Earth-like – with lakes, streams and a thicker atmosphere – to the nearly-airless, freezing desert it is today. 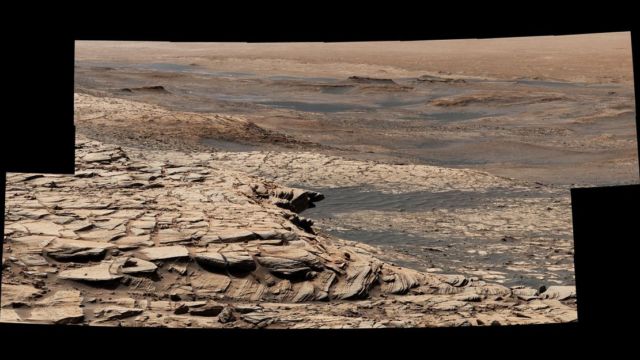 Curiosity’s View From the Top of the ‘Greenheugh Pediment’.  Credits: NASA/JPL-Caltech/MSSS.

The rover’s next stop is a part of the mountain called the “sulfate-bearing unit.” Sulfates, like gypsum and Epsom salts, usually form around water as it evaporates, and they are yet another clue to how the climate and prospects for life changed nearly 3 billion years ago.

But between the rover and those sulfates lies a vast patch of sand that Curiosity must drive around to avoid getting stuck. Hence the mile-long road trip: Rover planners, who are commanding Curiosity from home rather than their offices at NASA’s Jet Propulsion Laboratory in Southern California, expect to reach the area in early fall, although the science team could decide to stop along the way to drill a sample or study any surprises they come across.