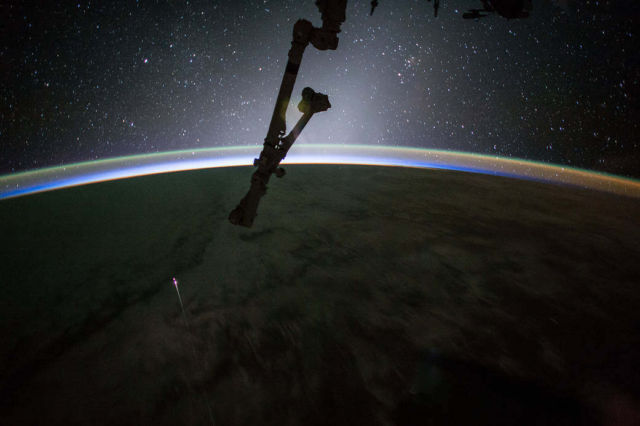 The small red dot on the left, is the SpaceX Dragon capsule as it reentered Earth’s atmosphere before splashing down in the Pacific Ocean.

The stunning image with the SpaceX Dragon capsule, that landed at 8:12 a.m. EDT, July 3, 2017, captured by NASA astronaut Jack Fischer from the Space Station.

He said: “Beautiful expanse of stars-but the “long” orange one is SpaceX-11 reentering! Congrats team for a successful splashdown & great mission!”

A variety of technological and biological studies conducted on the International Space Station are returning in Dragon.

The Fruit Fly Lab-02 experiment seeks to better understand the effects of prolonged exposure to microgravity on the heart.  Samples from the Systemic Therapy of NELL-1 for osteoporosis will return as part of an investigation using rodents as models to test a new drug that can both rebuild bone and block further bone loss, improving crew health. The Cardiac Stem Cells experiment investigated how microgravity affects stem cells and the factors that govern stem cell activity.

The Dragon spacecraft launched June 3 on a SpaceX Falcon 9 rocket from historic Launch Complex 39A at NASA’s Kennedy Space Center in Florida, and arrived at the station June 5.