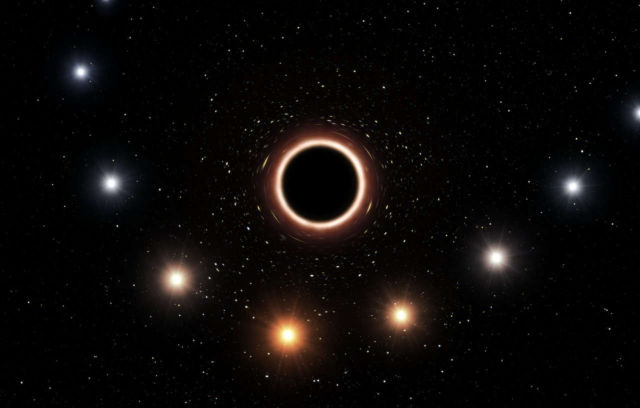 Observations made with ESO’s Very Large Telescope have for the first time revealed the effects predicted by Einstein’s general relativity on the motion of a star passing through the extreme gravitational field near the supermassive black hole in the center of the Milky Way. This long-sought result represents the climax of a 26-year-long observation campaign using ESO’s telescopes in Chile.

Above, an artist’s impression of gravitational red-shift at work – as the star swings past close to the supermassive black hole, its light is “stretched” out so that it appears red from Earth.  Credit: ESO/M. Kornmesser

New infrared observations from the exquisitely sensitive GRAVITY, SINFONI and NACO instruments on ESO’s Very Large Telescope (VLT) have now allowed astronomers to follow one of these stars, called S2, as it passed very close to the black hole during May 2018. At the closest point this star was at a distance of less than 20 billion kilometres from the black hole and moving at a speed in excess of 25 million kilometres per hour — almost three percent of the speed of light.

These extremely precise measurements were made by an international team led by Reinhard Genzel of the Max Planck Institute for Extraterrestrial Physics (MPE) in Garching, Germany. Genzel explains:

“This is the second time that we have observed the close passage of S2 around the black hole in our galactic center. But this time, because of much improved instrumentation, we were able to observe the star with unprecedented resolution. We have been preparing intensely for this event over several years, as we wanted to make the most of this unique opportunity to observe general relativistic effects.”