Home/Posts/Art-Entertainment, Physics/“Expanding hole” Illusion makes you feel like Falling Into a Black Hole
Previous Next 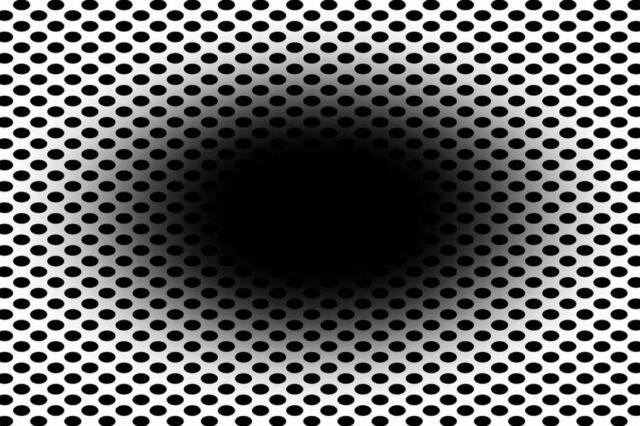 As part of a recent study led by the University of Oslo, some static patterns evoke the perception of an illusory expanding central region or “hole.”

“We asked observers to rate the magnitudes of illusory motion or expansion of black holes, and these predicted the degree of dilation of the pupil, measured with an eye tracker. In contrast, when the “holes” were colored (including white), i.e., emitted light, these patterns constricted the pupils, but the subjective expansions were also weaker compared with the black holes.

The change rates of pupil diameters were signiﬁcantly related to the illusory motion phenomenology only with the black holes. These ﬁndings can be accounted for within a perceiving-the-present account of visual illusions, where both the illusory motion and the pupillary adjustments represent compensatory mechanisms to the perception of the next moment, based on shared experiences with the ecological regularities of light.”

“Here we show based on the new ‘expanding hole’ illusion that that the pupil reacts to how we perceive light – even if this ‘light’ is imaginary like in the illusion – and not just to the amount of light energy that actually enters the eye. The illusion of the expanding hole prompts a corresponding dilation of the pupil, as it would happen if darkness really increased.”

The study was published in the journal Frontiers in Human Neuroscience