First video of Cells moving through a Living Organism

First video of Cells moving through a Living Organism 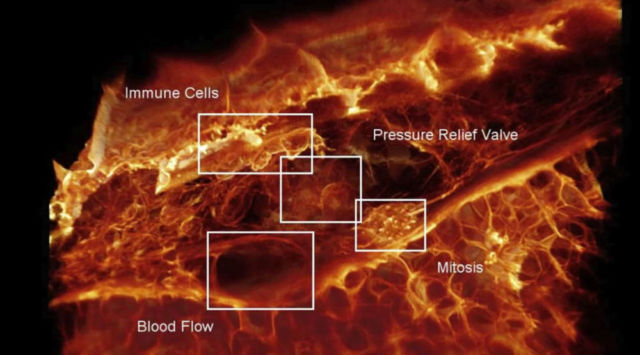 Scientists have imaged living cells with microscopes for hundreds of years, but the sharpest views have come from cells isolated on glass slides.

The large groups of cells inside whole organisms scramble light like a bagful of marbles, Betzig says:

“This raises the nagging doubt that we are not seeing cells in their native state, happily ensconced in the organism in which they evolved.”

In the video, an immune cell migrates through a zebrafish’s inner ear while scooping up particles of sugar (blue) along the way.  Credit: T. Liu et al./Science 2018

Even when viewing cells individually, the microscopes most commonly used to study cellular inner workings are usually too slow to follow the action in 3-D. These microscopes bathe cells with light thousands to millions of times more intense than the desert sun, Betzig says:

“This also contributes to our fear that we are not seeing cells in their natural, unstressed form.

It’s often said that seeing is believing, but when it comes to cell biology, I think the more appropriate question is, ‘When can we believe what we see?'”