For the first time Data Transmission between Underwater and Airborne devices

For the first time Data Transmission between Underwater and Airborne devices 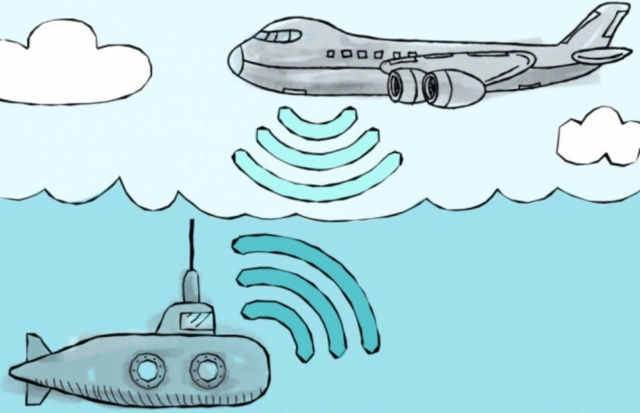 MIT Media Lab researchers have designed a system that allows for the first time underwater and airborne sensors to directly share data.

An underwater transmitter directs a sonar signal to the water’s surface, causing tiny vibrations that correspond to the 1s and 0s transmitted. Above the surface, a highly sensitive receiver reads these minute disturbances and decodes the sonar signal.

Until recently, there has never been a way to send communication signals between air and water. If an underwater submarine passes beneath a plane in the sky, there’s been no way for them to communicate with each other without having the submarine surface, jeopardizing its location to an adversary.

Fadel Adib and Francesco Tonolini of MIT Media Lab, have developed a way to connect these seemingly dissonant mediums through something called Translational Acoustic-RF communication, or TARF. Using sound waves from underwater, and Radar from the air, messages can be transmitted by creating faint ripples on the surface of the water.