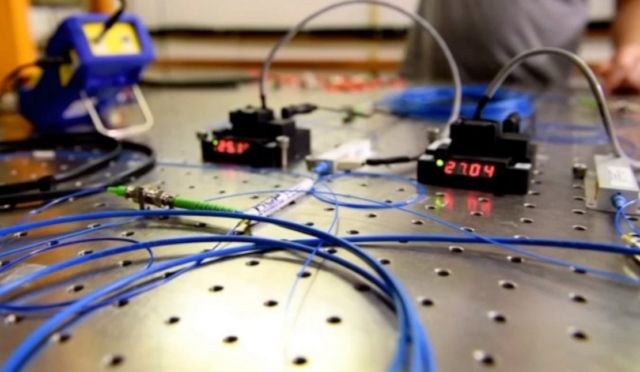 High-Fidelity Quantum Teleportation achieved for the first time. The experiment gets us closer to a quantum internet that could revolutionize computing in cryptography and search.

A viable quantum internet — a network in which information stored in qubits is shared over long distances through entanglement — would transform the fields of data storage, precision sensing and computing, ushering in a new era of communication.

This month, scientists at Fermilab, a U.S. Department of Energy Office of Science national laboratory, and their partners took a significant step in the direction of realizing a quantum internet.

In a paper published in PRX Quantum, the team presents for the first time a demonstration of a sustained, long-distance (44 kilometers of fiber) teleportation of qubits of photons (quanta of light) with fidelity greater than 90%. The qubits were teleported over a fiber-optic network using state-of-the-art single-photon detectors and off-the-shelf equipment.

“We’re thrilled by these results,” said Fermilab scientist Panagiotis Spentzouris, head of the Fermilab quantum science program and one of the paper’s co-authors. “This is a key achievement on the way to building a technology that will redefine how we conduct global communication.”

Above: In a demonstration of high-fidelity quantum teleportation at the Fermilab Quantum Network, fiber-optic cables connect off-the-shelf devices (shown above), as well as state-of-the-art R&D devices. Photo: Fermilab