NASA’s Cassini spacecraft has revealed a surprising feature emerging at Saturn‘s northern pole as it nears summertime: a warming, high-altitude vortex with a hexagonal shape, akin to the famous hexagon.

The finding, published Sept. 3 in Nature Communications, is intriguing, because it suggests that the lower-altitude hexagon may influence what happens above, and that it could be a towering structure hundreds of miles in height.

Above, this colorful view from NASA’s Cassini mission is the highest-resolution view of the unique six-sided jet stream at Saturn’s north pole known as “the hexagon.”  Credit NASA/JPL-Caltech/SSI/Hampton University

When Cassini arrived at the Saturnian system in 2004, the southern hemisphere was enjoying summertime, while the northern was in the midst of winter. The spacecraft spied a broad, warm high-altitude vortex at Saturn’s southern pole but none at the planet’s northern pole. The new study reports the first glimpses of a northern polar vortex forming high in the atmosphere, as Saturn’s northern hemisphere approached summertime. This warm vortex sits hundreds of miles above the clouds, in the stratosphere, and reveals an unexpected surprise. 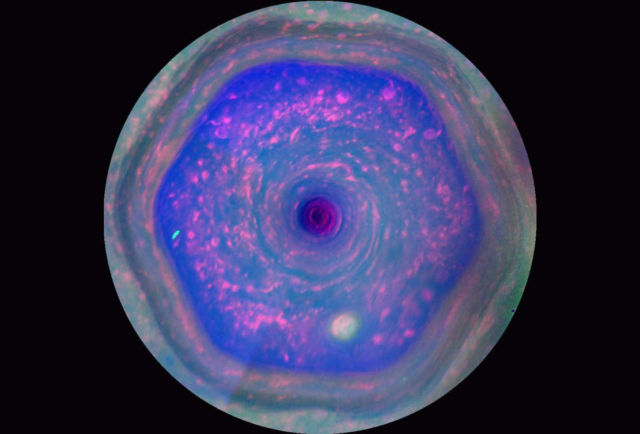 Leigh Fletcher of the University of Leicester, lead author of the new study, said:

“The edges of this newly-found vortex appear to be hexagonal, precisely matching a famous and bizarre hexagonal cloud pattern we see deeper down in Saturn’s atmosphere.”