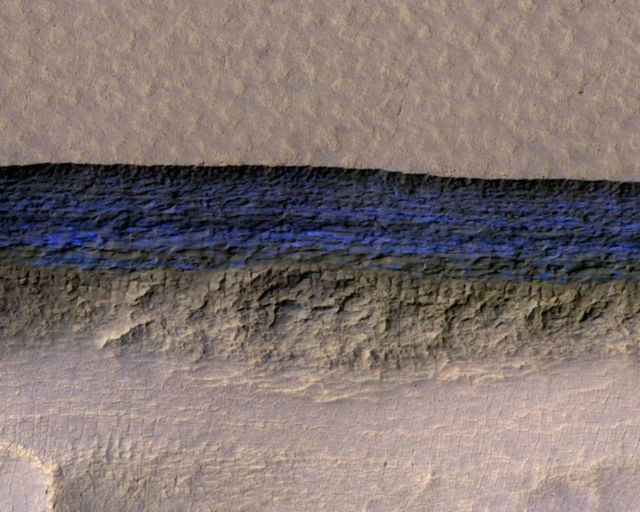 Scientists have found eight sites where thick deposits of ice beneath Mars‘ surface are exposed in faces of eroding slopes.

Above, a cross-section of underground ice is exposed at the steep slope that appears bright blue in this enhanced-color view from the HiRISE camera on NASA’s Mars Reconnaissance Orbiter. The scene is about 550 yards wide. The scarp drops about 140 yards from the level ground in the upper third of the image.  Credits NASA/JPL-Caltech/UA/USGS

The ice was likely deposited as snow long ago. The deposits are exposed in cross section as relatively pure water ice, capped by a layer one to two yards (or meters) thick of ice-cemented rock and dust. They hold clues about Mars’ climate history. They also may make frozen water more accessible than previously thought to future robotic or human exploration missions. 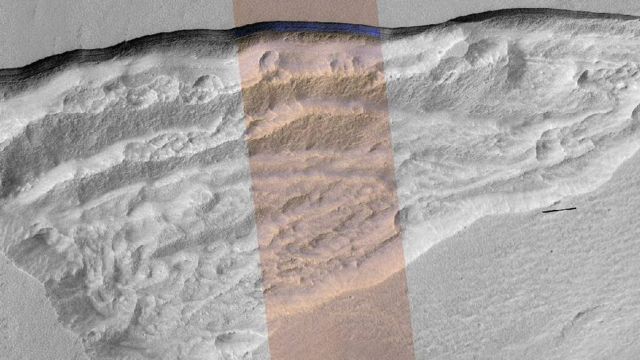 Researchers who located and studied the scarp sites with the High Resolution Imaging Science Experiment (HiRISE) camera on MRO reported the findings today in the journal Science. The sites are in both northern and southern hemispheres of Mars, at latitudes from about 55 to 58 degrees, equivalent on Earth to Scotland or the tip of South America.

“There is shallow ground ice under roughly a third of the Martian surface, which records the recent history of Mars,” said the study’s lead author, Colin Dundas of the U.S. Geological Survey’s Astrogeology Science Center in Flagstaff, Arizona. “What we’ve seen here are cross-sections through the ice that give us a 3-D view with more detail than ever before.”