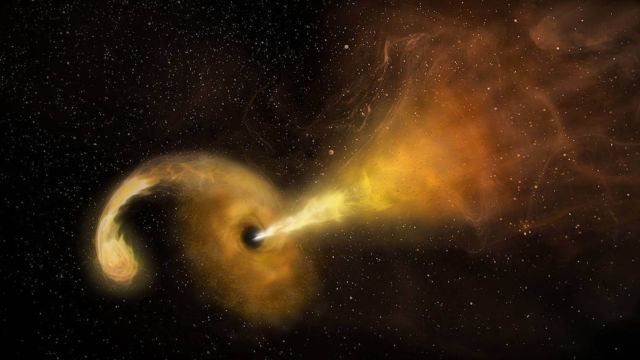 A black hole is an astronomical object with a gravitational pull so strong that nothing, not even light, can escape it.

A black hole’s “surface,” called its event horizon, defines the boundary where the velocity needed to escape exceeds the speed of light, which is the speed limit of the cosmos. Matter and radiation fall in, but they can’t get out.

Two main classes of black holes have been extensively observed. Stellar-mass black holes with three to dozens of times the Sun’s mass are spread throughout our Milky Way galaxy, while supermassive monsters weighing 100,000 to billions of solar masses are found in the centers of most big galaxies, ours included.

This image is an artist’s concept of a tidal disruption event that happens when a star passes fatally close to a supermassive black hole, which reacts by launching a relativistic jet.

What is a black hole? Learn more.