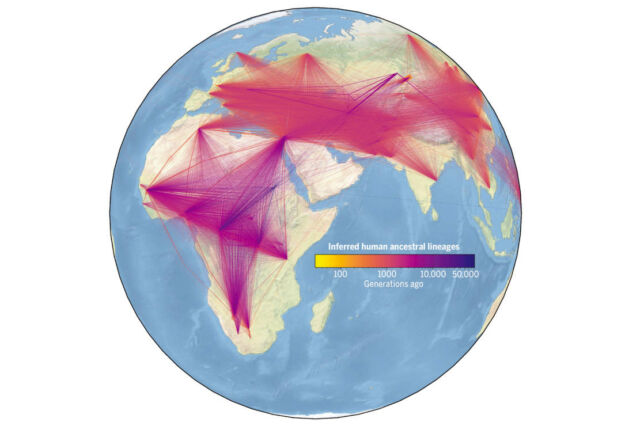 Scientists create largest ever human family tree, a single genealogy that traces the ancestry of all of us.

BDI researchers have taken a major step towards mapping the entirety of genetic relationships among humans.

The past two decades have seen extraordinary advancements in human genetic research, generating genomic data for hundreds of thousands of individuals, including from thousands of prehistoric people. This raises the exciting possibility of tracing the origins of human genetic diversity to produce a complete map of how individuals across the world are related to each other.

Until now, the main challenges to this vision were working out a way to combine genome sequences from many different databases and developing algorithms to handle data of this size. However, a new method published today by BDI researchers can easily combine data from multiple sources and scale to accommodate millions of genome sequences.

Dr Yan Wong, an evolutionary geneticist at the BDI and one of the principal authors, explained: ‘We have basically built a huge family tree, a genealogy for all of humanity that models as exactly as we can the history that generated all the variation in the modern human genome. This genealogy allows us to see how every person’s genetic sequence relates to every other, along all the points of the genome.’

Since individual genomic regions are only inherited from one parent, either the mother or the father, the ancestry of each point on the genome can be thought of as a tree. The set of trees, known as a “tree sequence” or “ancestral recombination graph”, links genetic regions back through time to ancestors where the genetic variation first appeared.