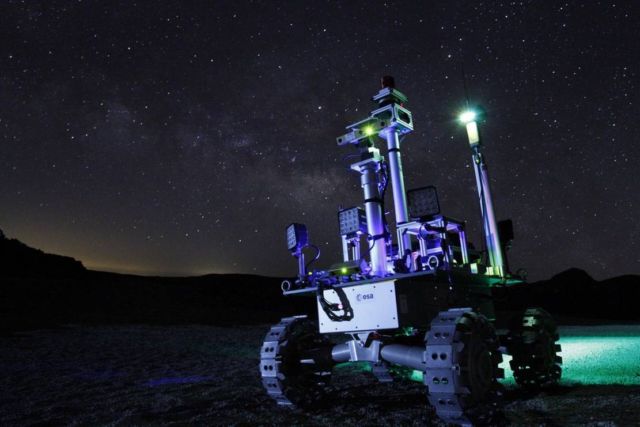 A laser light shone through the dark could power robotic exploration of the most tantalising locations in our Solar System: the permanently-shadowed craters around the Moon’s poles, believed to be rich in water ice and other valuable materials.

ESA’s Discovery & Preparation programme funded the design of a laser system to keep a rover supplied with power from up to 15 km away while it explores some of these dark craters.

At the highest lunar latitudes, the Sun stays low on the horizon all year round, casting long shadows that keep sunken craters mired in permanent shadow, potentially on a timescale of billions of years. Data from NASA’s Lunar Reconnaissance Orbiter, India’s Chandrayaan-1 and ESA’s SMART-1 orbiters show these ‘permanently shadowed regions’ are rich in hydrogen, strongly suggesting water ice can be found there.

ESA’s PHILIP, ‘Powering rovers by High Intensity Laser Induction on Planets’, project explored powering a rover to explore perma-shadowed craters on the Moon via a laser mounted on a lander, from up to 15 km away. The light reflected to the lander from the rover could also be used for communication, with signal pulses introduced via a modulating retroreflector.

For the PHILIP project, a landing site was selected on the connecting ridge between de Gerlache and Shackleton craters – the western edge of which is seen here. A trio of permanently shadowed regions are available for exploration by the laser-powered rover within 7.1 km, 5.7 km and 4.6 km respectively.