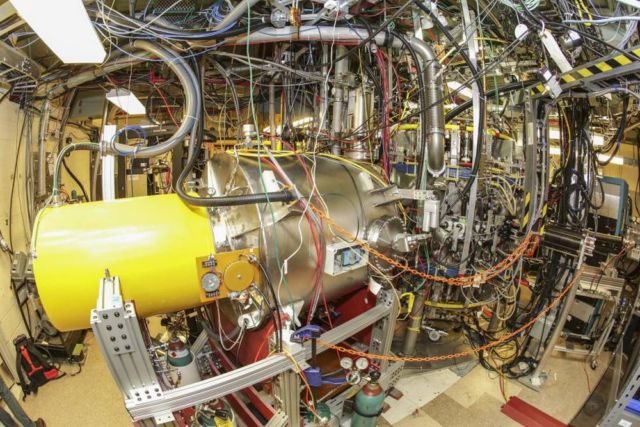 New machine ready to see if magic metal Lithium, can help bring the fusion that lights the stars to Earth

Lithium, the light silvery metal used in everything from pharmaceutical applications to batteries that power your smart phone or electric car, could also help harness on Earth the fusion energy that lights the sun and stars.

Above, exterior view of the LTX-β with the neutral beam injector in yellow.

Lithium can maintain the heat and protect the walls inside doughnut-shaped tokamaks that house fusion reactions, and will be used to produce tritium, the hydrogen isotope that will combine with its cousin deuterium to fuel fusion in future reactors.

The upgrade, funded by the DOE Office of Science, installed a neutral beam injector — on long-term loan from Tri Alpha Energy, now TAE Technologies — to heat, fuel and increase the density of the plasma. Other improvements include an increase in the magnetic field that confines the plasma, and installation of new lithium systems. The improvements bring conditions in the experiment closer to those in a fusion reactor, said Dick Majeski, principal investigator of the experiment.

The novel device, which uses a coating of lithium to cover the interior wall of the small tokamak, had prior to the upgrade become the first to keep temperature constant from the hot, central core of the plasma to the normally cool outer edge. “The machine is now ready to exploit the full capability of the upgrade,” said Phil Efthimion, head of PPPL’s Plasma Science and Technology unit, which oversees the experiment.

Fusion combines light elements in the form of plasma — the hot, charged state of matter composed of free electrons and atomic nuclei — that generates massive amounts of energy. Scientists are seeking to replicate fusion on Earth for a virtually inexhaustible supply of power to generate electricity. 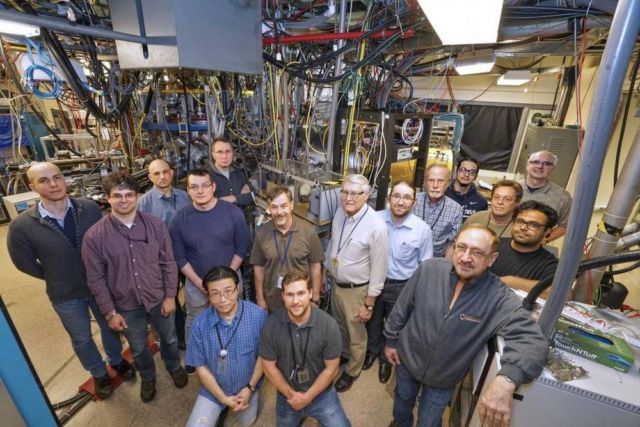 The team that upgraded the LTX-β.