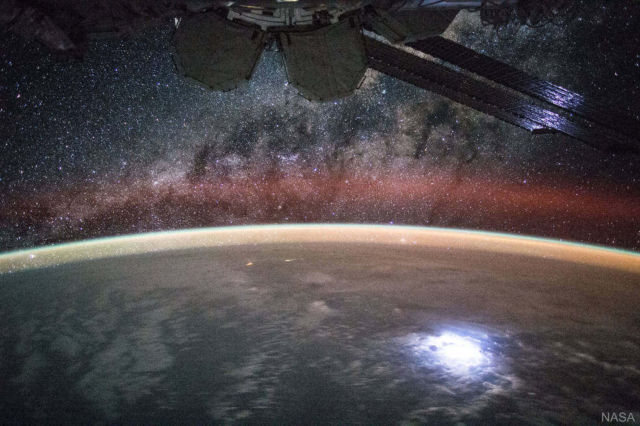 NASA’s new Atmospheric Waves Experiment will observe the airglow from a perch on the Space Station to help scientists understand, and ultimately improve forecasts of, space weather changes in the upper atmosphere.

NASA has selected a new mission that will help scientists understand and, ultimately, forecast the vast space weather system around our planet. Space weather is important  because it can have profound impacts – affecting technology and astronauts in space, disrupting radio communications and, at its most severe, overwhelming power grids.

Above, an image taken from the International Space Station shows orange swaths of airglow hovering in Earth’s atmosphere.  Credit NASA

The new experiment will, for the first time, obtain global observations of an important driver of space weather in a dynamic region of Earth’s upper atmosphere that can cause interference with radio and GPS communications.

The Atmospheric Waves Experiment (AWE) mission will cost $42 million and is planned to launch in August 2022, attached to the exterior of the Earth-orbiting International Space Station. From its space station perch, AWE will focus on colorful bands of light in Earth’s atmosphere, called airglow, to determine what combination of forces drive space weather in the upper atmosphere.

Researchers once thought that only the Sun’s constant outflow of ultraviolet light and particles, the solar wind, could affect the region. However, recently they have learned that solar variability is not enough to drive the changes observed, and Earth’s weather also must be having an effect. To help unravel that connection, AWE will investigate how waves in the lower atmosphere, caused by variations in the densities of different packets of air, impact the upper atmosphere.

AWE is a Mission of Opportunity under NASA’s Heliophysics Explorers Program, which conducts focused scientific research and develops instrumentation to fill the scientific gaps between the agency’s larger missions. Since the 1958 launch of NASA’s first satellite Explorer 1, which discovered Earth’s radiation belts, the Explorers Program has supported more than 90 missions. The Uhuru and Cosmic Background Explorer (COBE) missions led to Nobel prizes for their investigators.

“The Explorers Program seeks innovative ideas for small and cost-constrained missions that can help unravel the mysteries of the universe and explore our place in it,” said Paul Hertz, NASA’s Director of Astrophysics. “This mission absolutely meets that standard with a creative and cost-effective mission to solve mysteries about Earth’s upper atmosphere.”