Neutrino from far across the Universe discovered

Neutrino from far across the Universe discovered 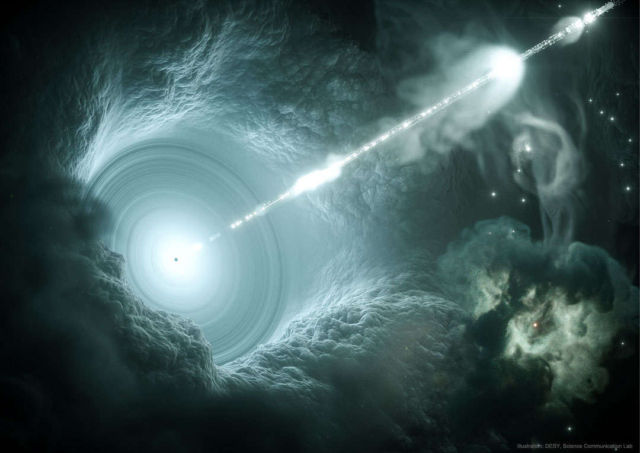 Humanity appears to have discovered a neutrino from far across the universe.

The new discovery unveiled with equipment frozen deep into ice beneath Earth’s South Pole, if confirmed, would mark the first clear detection of cosmologically-distant neutrinos and the dawn of an observed association between energetic neutrinos and cosmic rays created by powerful jets emanating from blazing quasars (blazars).

Above, artist’s impression of the active galactic nucleus. The supermassive black hole at the centre of the accretion disk sends a narrow high-energy jet of matter into space, perpendicular to the disc.  Credit: DESY, Science Communication Lab

Once the Antarctican IceCube detector measured an energetic neutrino in 2017 September, many of humanity’s premier observatories sprang into action to try to identify a counterpart in light. And they did.

Even though this and other position and time coincidences are statistically strong, astronomers will await other similar neutrino – blazar light associations to be absolutely sure.