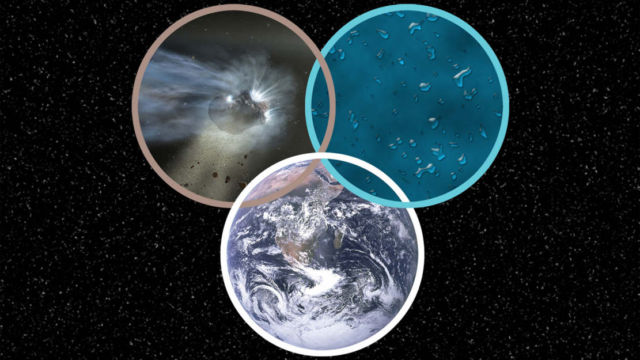 The mystery of why Earth has so much water, allowing our “blue marble” to support an astounding array of life, is clearer with new research into comets.

Comets are like snowballs of rock, dust, ice, and other frozen chemicals that vaporize as they get closer to the Sun, producing the tails seen in images. A new study reveals that the water in many comets may share a common origin with Earth’s oceans, reinforcing the idea that comets played a key role in bringing water to our planet billions of years ago.

The Stratospheric Observatory for Infrared Astronomy, SOFIA, the world’s largest airborne observatory, observed Comet Wirtanen as it made its closest approach to Earth in December 2018. Data collected from the high-flying observatory found that this comet contains “ocean-like” water. Comparing this with information about other comets, scientists suggest in a new study that many more comets than previously thought could have delivered water to Earth. The findings were published in Astronomy and Astrophysics Letters.

“We have identified a vast reservoir of Earth-like water in the outer reaches of the solar system,” said Darek Lis, a scientist at NASA’s Jet Propulsion Laboratory, in Pasadena, California, and lead author of the study. “Water was crucial for the development of life as we know it. We not only want to understand how Earth’s water was delivered, but also if this process could work in other planetary systems.”

Planets form from debris orbiting in a disk shape around a star; small pieces of debris can stick together and grow larger over time. Leftover debris remains in regions of our own solar system like the Kuiper Belt, beyond Neptune, or the Oort Cloud, far past Pluto. Comets come from these areas, but we can only see them when their orbits bring them closer to the Sun. The heat from the Sun causes some of the dirty snow to vaporize, creating the fuzzy halo or “coma” of water vapor, dust and ice grains seen in comet images.

Scientists predict that the water in Earth’s oceans came from water-carrying bodies in the early solar system that collided with our planet, similar to today’s ice-rich asteroids or comets. But scientists do not know where in the formative disk these objects originated.