Oceans Warming at the rate of 5 Atom Bombs per Second

Oceans Warming at the rate of 5 Atom Bombs per Second 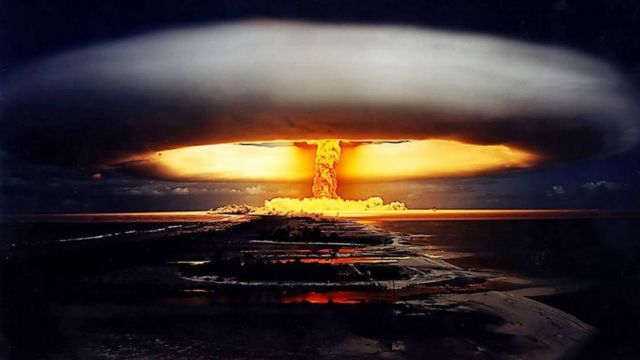 A new analysis shows the world’s oceans were the warmest in 2019 than any other time in recorded human history, especially between the surface and a depth of 2,000 meters.

The study, conducted by an international team of 14 scientists from 11 institutes across the world, also concludes that the past ten years have been the warmest on record for global ocean temperatures, with the past five years holding the highest record.

The authors published their results on Jan. 13 in Advances in Atmospheric Sciences, with a call to action for humans to reverse climate change. In the face of such disastrous effects as the 17.9 million acres Australian bushfire, which has resulted in 24 deaths and thousands of homes destroyed so far, the researchers report that global ocean temperature is not only increasing, but it’s speeding up. 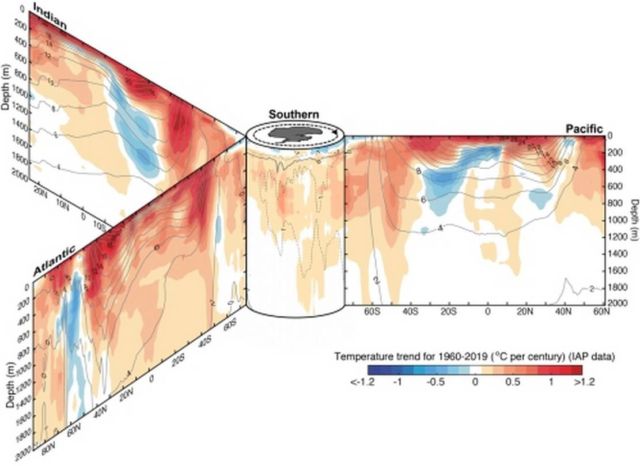 Ocean temperature trend from 1960 to 2019 in the three major ocean basins from surface to 2000m. The zonal and vertical sections are organized around Southern Ocean in the center. Black contours show the associated climatological mean temperature with intervals of 2 oC.  Credit Cheng Lijing

“That’s a lot of zeros indeed. To make it easier to understand, I did a calculation. The Hiroshima atom-bomb exploded with an energy of about 63,000,000,000,000 Joules. The amount of heat we have put in the world’s oceans in the past 25 years equals to 3.6 billion Hiroshima atom-bomb explosions.” said CHENG Lijing, lead paper author and associate professor with the International Center for Climate and Environmental Sciences at the Institute of Atmospheric Physics (IAP) of the Chinese Academy of Sciences (CAS). Cheng is also affiliated with CAS’s Center for Ocean Mega-Science. “This measured ocean warming is irrefutable and is further proof of global warming. There are no reasonable alternatives aside from the human emissions of heat trapping gases to explain this heating.”