An Organism can Survive 16 months in Outer Space

An Organism can Survive 16 months in Outer Space 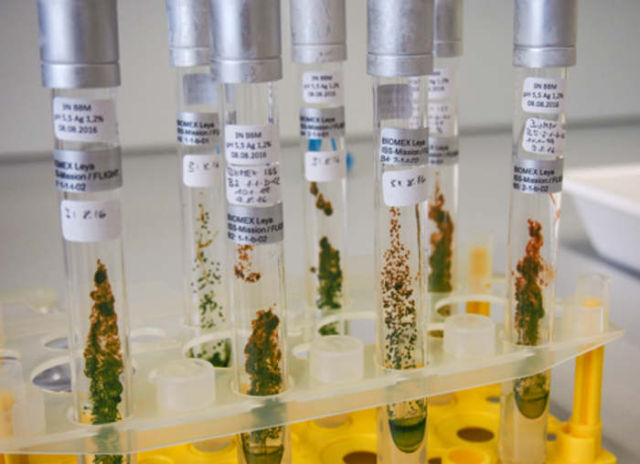 NASA scientists discover an organism that can survive 16 months in outer space.

Two algae survived 16 months on the exterior of the International Space Station ISS, despite extreme temperature fluctuations, the vacuum of space, UV and cosmic radiation. That was the astonishing result of an experiment conducted by Dr. Thomas Leya at the Fraunhofer Institute for Cell Therapy and Immunology IZI in Potsdam in cooperation with German and international partners.

Above, the various specimens of green-alga strain CCCryo 101-99 again grew new populations after gliding in low-Earth orbit for 450 days on the outside of the ISS. Only one specimen did not survive its space flight.  Credit Thomas Leya / Fraunhofer IZI-BB

In a long-term experiment on the Space Station, the researchers studied how the extreme conditions in space affect algae.

Research findings could benefit industrial applications and perhaps a mission to Mars. Practical application in the food and cosmetic industries.

“We slightly desiccated the algal strains in preparation for their time in space,” explains Dr. Leya. A Progress spacecraft transported the organisms into space on July 23, 2014, and a Soyuz capsule returned the algal cultures to Earth. All in all, they had to endure some 16 months on the outside of the ISS – with only neutral-density filters reducing the effects of radiation. Sensors measured and logged temperature changes and amounts of cosmic radiation.