Home/Posts/NATURE/Environment/Ozone Hole smallest since 1988
Previous Next 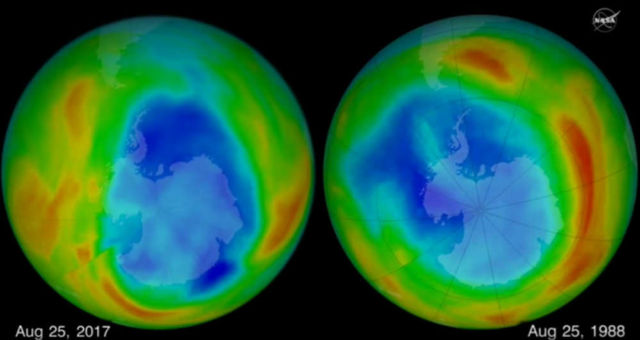 NASA: Earth’s Ozone Hole is the smallest since 1988.

NASA and NOAA scientists work together to study the ozone layer, monitoring the hole over Antarctica as it fluctuates with the seasons. This year, the ozone hole’s annual maximum set a record — the smallest it’s been since 1988.

The hole in the ozone layer is caused each year as ozone molecules react with chlorofluorocarbons (CFCs) in the atmosphere. The reactions occur at cold temperatures, so the hole reaches a maximum size each year at the end of southern winter, and then heals during the warmer summer months. Although CFCs have been banned since 1987 under the Montreal Protocol on Substances that Deplete the Ozone Layer, the compounds decay very slowly, and still remain in the atmosphere. This year, the small ozone hole was mostly caused by warmer temperatu res, which slowed down the reactions between ozone and CFCs.

“The Antarctic ozone hole was exceptionally weak this year,” said Paul A. Newman, chief scientist for Earth Sciences at NASA’s Goddard Space Flight Center in Greenbelt, Maryland. “This is what we would expect to see given the weather conditions in the Antarctic stratosphere.”

The smaller ozone hole in 2017 was strongly influenced by an unstable and warmer Antarctic vortex – the stratospheric low pressure system that rotates clockwise in the atmosphere above Antarctica. This helped minimize polar stratospheric cloud formation in the lower stratosphere. The formation and persistence of these clouds are important first steps leading to the chlorine- and bromine-catalyzed reactions that destroy ozone, scientists said. These Antarctic conditions resemble those found in the Arctic, where ozone depletion is much less severe.