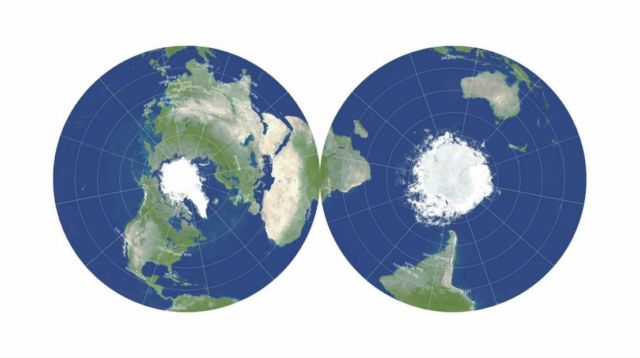 Princeton professors J. Richard Gott and Robert Vanderbei worked with Drexel professor David Goldberg to create a revolutionary new map:
A two-sided disk that can slip inside a textbook or be stacked neatly for storage. It provides more accurate distances than any existing flat map, while keeping visual distortions at a minimum.

For centuries, mapmakers have agonized over how to accurately display our round planet on anything other than a globe.

Now, a fundamental re-imagining of how maps can work has resulted in the most accurate flat map ever made, from a trio of map experts: J. Richard Gott, an emeritus professor of astrophysics at Princeton and creator of a logarithmic map of the universe once described as “arguably the most mind-bending map to date”; Robert Vanderbei, a professor of operations research and financial engineering who created the “Purple America” map of election results; and David Goldberg, a professor of physics at Drexel University.

Their new map is two-sided and round, like a phonograph record or vinyl LP. Like many radical developments, it seems obvious in hindsight. Why not have a two-sided map that shows both sides of the globe? It breaks away from the limits of two dimensions without losing any of the logistical convenience — storage and manufacture — of a flat map.

Gott began considering “envelope polyhedra,” with regular shapes glued together back-to-back, which led to the breakthrough idea for the double-sided map.

“This is a map you can hold in your hand,” Gott said.

The map can be printed front-and-back on a single magazine page, ready for the reader to cut out. The three cartographers imagine printing their maps on cardboard or plastic and then stacking them like records, to be stored together in a box or slipped inside the covers of textbooks.