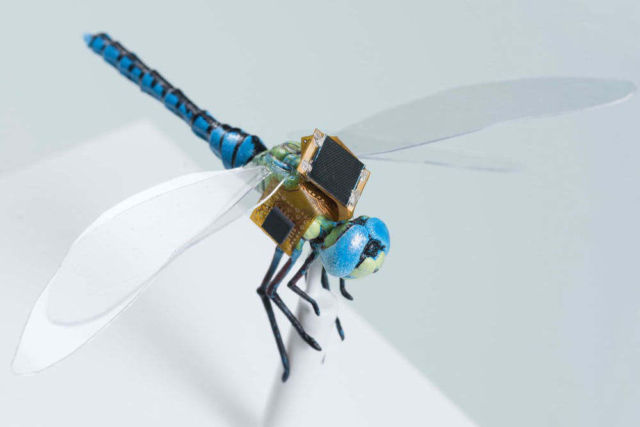 They are also experiment with the technology to interact with and guide, animals as they fly.

Above, a first generation version of the backpack guidance system, on a to-scale model of a dragonfly.   Credit Charles Stark Draper Laboratory

Engineers have fitted dragonflies with RoboDragonfly backpack guidance system , including controllers that issue commands directly to the neurons.

According to a 2007 study published in the journal Physical Review Letters, the authors found that dragonflies maximize their lift when they flap both sets of wings together, and they hover by flapping their wing pairs out of sync, though at the same rate.

Jesse Wheeler, a biomedical engineer at the Charles Stark Draper Laboratory (CSDL) in Massachusetts and team leader on the DragonflEye program, said:

“This system pushes the boundaries of energy harvesting, motion sensing, algorithms, miniaturization and optogenetics, all in a system small enough for an insect to wear.”