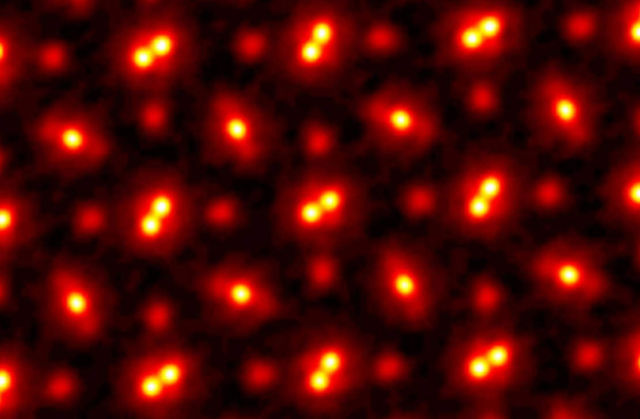 Scientists by zooming-in on a crystal 100 million times, capture the highest ever resolution images of atoms.

In 2018, Cornell researchers built a high-powered detector that, in combination with an algorithm-driven process called ptychography, set a world record by tripling the resolution of a state-of-the-art electron microscope.

As successful as it was, that approach had a weakness. It only worked with ultrathin samples that were a few atoms thick. Anything thicker would cause the electrons to scatter in ways that could not be disentangled.

Now a team, again led by David Muller, the Samuel B. Eckert Professor of Engineering, has bested its own record by a factor of two with an electron microscope pixel array detector (EMPAD) that incorporates even more sophisticated 3D reconstruction algorithms.

The resolution is so fine-tuned, the only blurring that remains is the thermal jiggling of the atoms themselves.

The above image shows an electron ptychographic reconstruction of a praseodymium orthoscandate (PrScO3) crystal, zoomed in 100 million times.

“This doesn’t just set a new record,” Muller said. “It’s reached a regime which is effectively going to be an ultimate limit for resolution. We basically can now figure out where the atoms are in a very easy way. This opens up a whole lot of new measurement possibilities of things we’ve wanted to do for a very long time. It also solves a long-standing problem – undoing the multiple scattering of the beam in the sample, which Hans Bethe laid out in 1928 – that has blocked us from doing this in the past.”