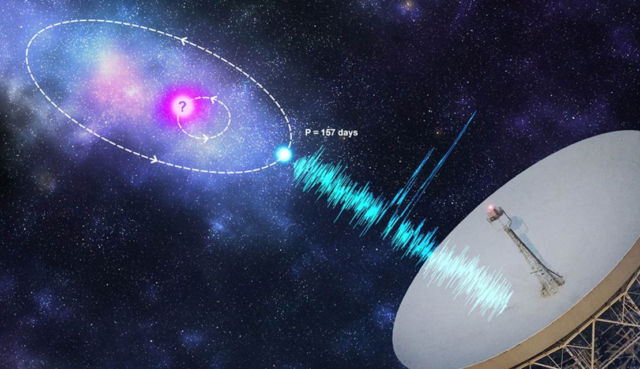 An investigation into one of the current great mysteries of astronomy has come to the fore thanks to a four-year observing campaign conducted at the Jodrell Bank Observatory.

Above: Artist’s impression of an orbital modulation model where the FRB progenitor (blue) is in an orbit with a companion astrophysical object (pink).   Credit Kristi Mickaliger

Using the 32 bursts discovered during the campaign, in conjunction with data from previously published observations, the team has discovered that emission from the FRB known as 121102 follows a cyclic pattern, with radio bursts observed in a window lasting approximately 90 days followed by a silent period of 67 days. The same behaviour then repeats every 157 days.

This discovery provides an important clue to identifying the origin of these enigmatic fast radio bursts. The presence of a regular sequence in the burst activity could imply that the powerful bursts are linked to the orbital motion of a massive star, a neutron star or a black hole.

Dr Kaustubh Rajwade of The University of Manchester, who led the new research, said:

“This is an exciting result as it is only the second system where we believe we see this modulation in burst activity. Detecting a periodicity provides an important constraint on the origin of the bursts and the activity cycles could argue against a precessing neutron star.”