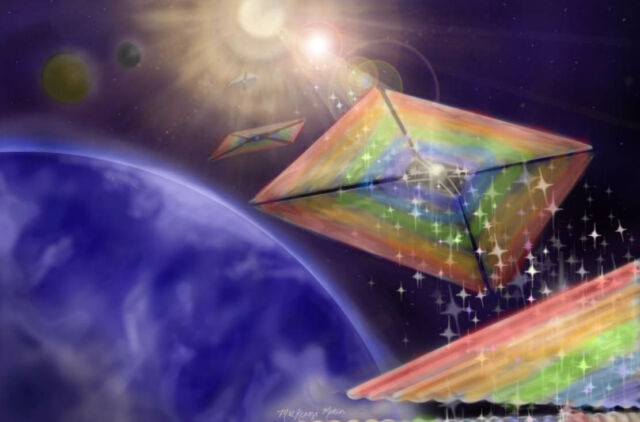 Diffractive solar sails, depicted in this conceptual illustration, could enable missions to hard-to-reach places, like orbits over the Sun’s poles.

As NASA’s exploration continues to push boundaries, a new solar sail concept selected by the agency for development toward a demonstration mission could carry science to new destinations.

“As we venture farther out into the cosmos than ever before, we’ll need innovative, cutting-edge technologies to drive our missions,” said NASA Administrator Bill Nelson. “The NASA Innovative Advanced Concepts program helps to unlock visionary ideas – like novel solar sails – and bring them closer to reality.”

Like a sailboat using wind to cross the ocean, solar sails use the pressure exerted by sunlight to propel a craft through space. Existing reflective solar sail designs are typically very large and very thin, and they are limited by the direction of the sunlight, forcing tradeoffs between power and navigation. Diffractive lightsails would use small gratings embedded in thin films to take advantage of a property of light called diffraction, which causes light to spread out when it passes through a narrow opening. This would allow the spacecraft to make more efficient use of sunlight without sacrificing maneuverability.

“Exploring the universe means we need new instruments, new ideas, and new ways of going places,” said Jim Reuter, associate administrator for NASA’s Space Technology Mission Directorate (STMD) at NASA Headquarters in Washington. “Our goal is to invest in those technologies throughout their lifecycle to support a robust ecosystem of innovation.”