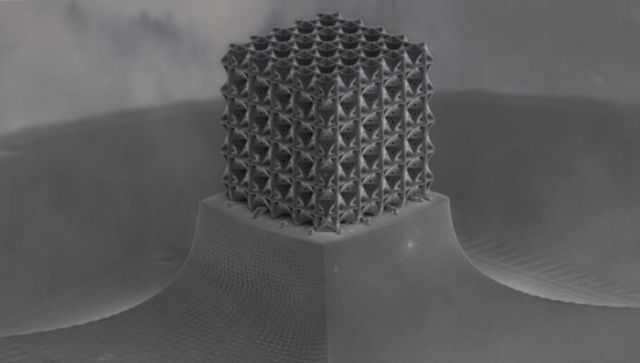 Researchers at the University of California, Irvine and other institutions have architecturally designed plate-nanolattices – nanometer-sized carbon structures – that are stronger than diamonds as a ratio of strength to density.

Above, carbon nanostructure, with wall thicknesses of about 160 nanometers, a closed-cell, plate-based nanolattice structure.  Cameron Crook and Jens Bauer / UCI

With wall thicknesses of about 160 nanometers, a closed-cell, plate-based nanolattice structure designed by researchers at UCI and other institutions is the first experimental verification that such arrangements reach the theorized limits of strength and stiffness in porous materials. Cameron Crook and Jens Bauer / UCI

In a recent study in Nature Communications, the scientists report success in conceptualizing and fabricating the material, which consists of closely connected, closed-cell plates instead of the cylindrical trusses common in such structures over the past few decades.

According to the paper, the team’s design has been shown to improve on the average performance of cylindrical beam-based architectures by up to 639 percent in strength and 522 percent in rigidity.

“Previous beam-based designs, while of great interest, had not been so efficient in terms of mechanical properties. This new class of plate-nanolattices that we’ve created is dramatically stronger and stiffer than the best beam-nanolattices.”