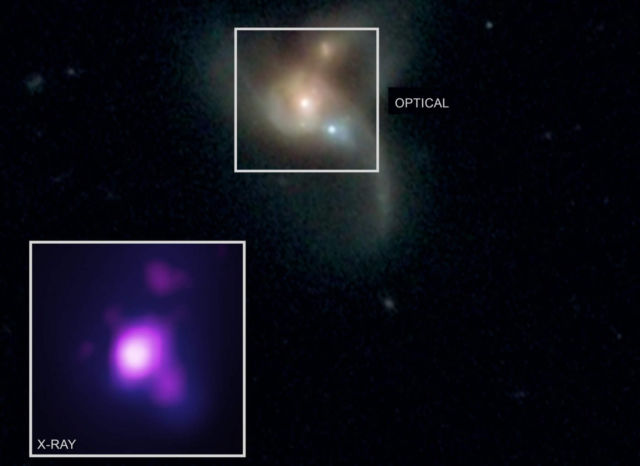 Telescopes on the ground and in space, captured three supermassive black holes are on a collision course.

Located about a billion light years from Earth, the system where this triple black hole merger is happening, called SDSS J0849+1114.

To make this discovery, astronomers combined data from telescopes on the ground as well as several in space including Chandra, Hubble, WISE and NuSTAR.

Scientists have seen multiple cases where two supermassive black holes are collision course. This latest result, however, is the best evidence yet for a trio of giant black holes.

Astronomers think these triplet collisions, while extremely rare, play a critical role in how the biggest black holes grow over time.

Ryan Pfeifle of George Mason University in Fairfax, Virginia, the first author of a new paper in The Astrophysical Journal describing these results, said:

“We were only looking for pairs of black holes at the time, and yet, through our selection technique, we stumbled upon this amazing system. This is the strongest evidence yet found for such a triple system of actively feeding supermassive black holes.

Through the use of these major observatories, we have identified a new way of identifying triple supermassive black holes. Each telescope gives us a different clue about what’s going on in these systems. We hope to extend our work to find more triples using the same technique.”