ESA’s ExoMars Trace Gas Orbiter has detected glowing green oxygen in Mars’ atmosphere – the first time that this emission has been seen around a planet other than Earth.

On Earth, glowing oxygen is produced during polar auroras when energetic electrons from interplanetary space hit the upper atmosphere. This oxygen-driven emission of light gives polar auroras their beautiful and characteristic green hue.

Above: An artist’s rendition of the Trace Gas Orbiter detecting a green glow in the atmosphere of Mars.  Credit ESA

The aurora, however, is just one way in which planetary atmospheres light up. The atmospheres of planets including Earth and Mars glow constantly during both day and night as sunlight interacts with atoms and molecules within the atmosphere. Day and night glow are caused by slightly different mechanisms: night glow occurs as broken-apart molecules recombine, whereas day glow arises when the Sun’s light directly excites atoms and molecules such as nitrogen and oxygen. 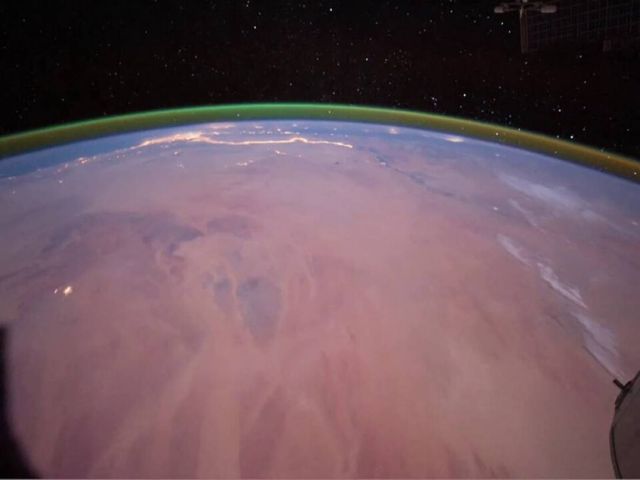 Airglow in Earth’s atmosphere observed from the International Space Station

On Earth, green night glow is quite faint, and so is best seen by looking from an ‘edge on’ perspective – as portrayed in many spectacular images taken by astronauts aboard the International Space Station (ISS). This faintness can be an issue when hunting for it around other planets, as their bright surfaces can drown it out.