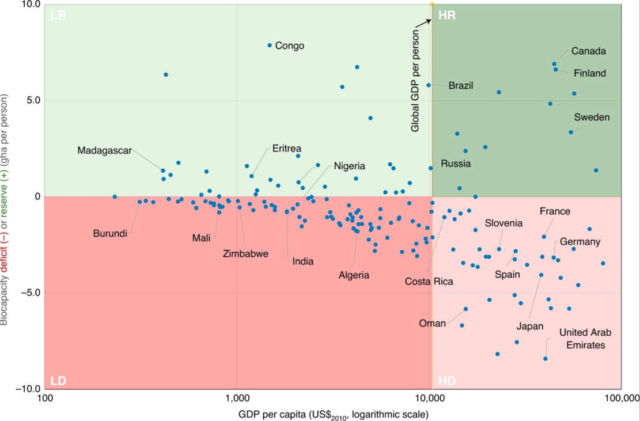 Humans are using 73% more natural resources than the Earth produces in a year.

Humanity consumed 73% more than what was available on Earth, in 2017.
14% of the population consumes 52% of Earth’s biocapacity.

As humanity’s demand on natural resources is increasingly exceeding Earth’s biological rate of regeneration, environmental deterioration such as greenhouse gas accumulation in the atmosphere, ocean acidification and groundwater depletion is accelerating.

As a result, the capacity of ecosystems to renew biomass, herein referred to as ‘biocapacity’, is becoming the material bottleneck for the human economy. Yet, economic development theory and practice continue to underplay the importance of natural resources, most notably biological ones.

“We analysed the unequal exposure of national economies to biocapacity constraints. We found that a growing number of people live in countries with both biocapacity deficits and below-average income. Low income thwarts these economies’ ability to compete for needed resources on the global market. By 2017, 72% of humanity lived in such countries. This trend not only erodes their possibilities for maintaining progress but also eliminates their chances for eradicating poverty, a situation we call an ‘ecological poverty trap’.”