Home/Posts/SCIENCES/Astronomy/Giant Storms on Neptune
Previous Next 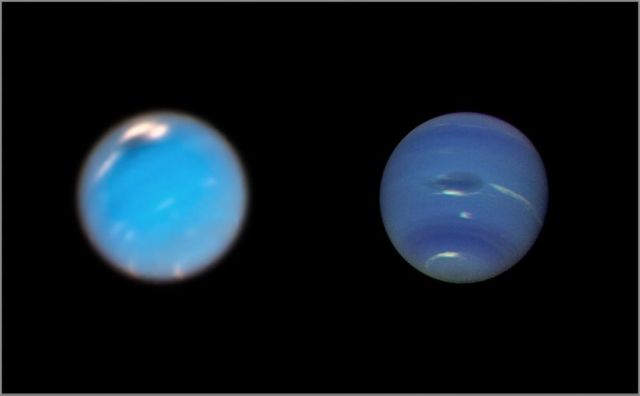 This composite picture shows images of storms on Neptune from the Hubble Space Telescope (left) and the Voyager 2 spacecraft (right).

The Hubble Wide Field Camera 3 image of Neptune, taken in Sept. and Nov. 2018, shows a new dark storm (top center). In the Voyager image, a storm known as the Great Dark Spot (GDS) is seen at the center. It is about 13,000 km by 6,600 km in size — as large along its longer dimension as the Earth. The white clouds seen hovering in the vicinity of the storms are higher in altitude than the dark material.  Images credit NASA/ESA/GSFC/JPL.

In 1989, NASA’s Voyager 2 zipped past Neptune—its final planetary target before speeding to the outer limits of the solar system. It was the first time a spacecraft had visited the remote world. As the craft zoomed by, it snapped pictures of two giant storms brewing in Neptune’s southern hemisphere. Scientists dubbed the storms “The Great Dark Spot” and “Dark Spot 2.” 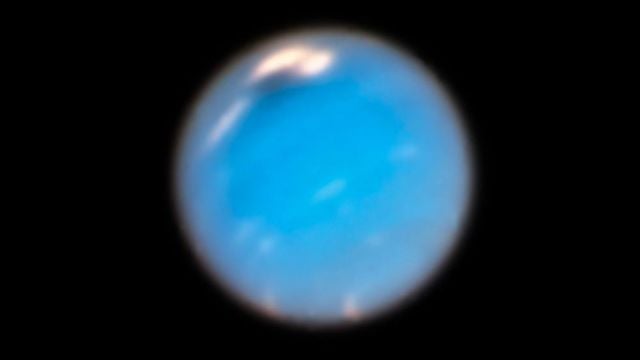 Just five years later, in 1994, NASA’s Hubble Space Telescope took sharp images of Neptune from Earth’s distance of 2.7 billion miles (4.3 billion kilometers). Scientists were eager to get another look at the storms. Instead, Hubble’s photos revealed that both the Earth-sized Great Dark Spot and the smaller Dark Spot 2 had vanished.

“It was certainly a surprise,” recalls Amy Simon, a planetary scientist at NASA’s Goddard Space Flight Center in Greenbelt, Maryland. “We were used to looking at Jupiter’s Great Red Spot, which presumably had been there for more than a hundred years.” Planetary scientists immediately began constructing computer simulations in order to understand the Great Dark Spot’s mysterious disappearance.

Now part of the Outer Planet Atmospheres Legacy (OPAL) project, Simon and her colleagues are beginning to answer these questions. Thanks to images captured by Hubble, the team has not only witnessed a storm’s formation for the first time but developed constraints that pinpoint the frequency and duration of the storm systems.