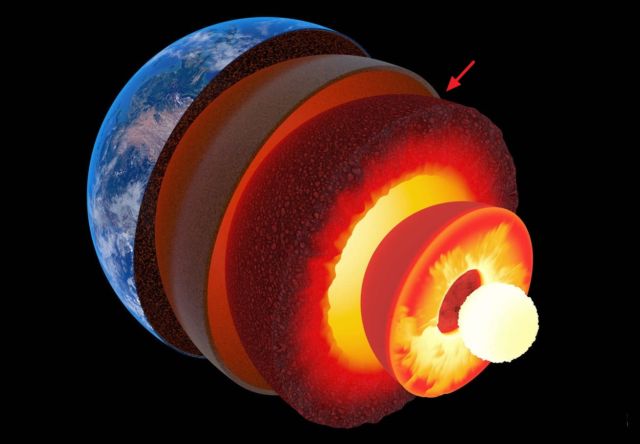 Using sound waves, scientists discovered that 1–2 percent of Earth’s oldest mantle rocks are made from diamond.

According to a new study from MIT and other universities, there may be more than a quadrillion tons of diamond hidden in the Earth’s interior.

Above, the mantle is a layer inside a terrestrial planet and some other rocky planetary bodies. Over 80% of Earth is composed of mantle.  Credit NASA

But the new results are unlikely to set off a diamond rush. The scientists estimate the precious minerals are buried more than 100 miles below the surface, far deeper than any drilling expedition has ever reached.

The ultradeep cache may be scattered within cratonic roots — the oldest and most immovable sections of rock that lie beneath the center of most continental tectonic plates. Shaped like inverted mountains, cratons can stretch as deep as 200 miles through the Earth’s crust and into its mantle; geologists refer to their deepest sections as “roots.”


In the new study, scientists estimate that cratonic roots may contain 1 to 2 percent diamond. Considering the total volume of cratonic roots in the Earth, the team figures that about a quadrillion (1016) tons of diamond are scattered within these ancient rocks, 90 to 150 miles below the surface.

“This shows that diamond is not perhaps this exotic mineral, but on the [geological] scale of things, it’s relatively common. We can’t get at them, but still, there is much more diamond there than we have ever thought before.”