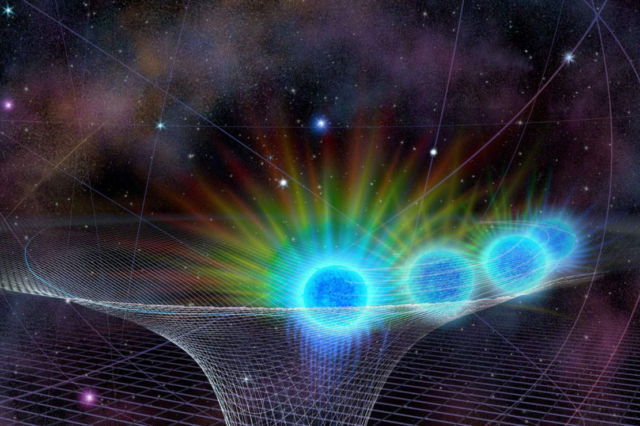 The giant black hole at the center of our Galaxy is getting hungrier because is now brighter in 24 years of observations.

UCLA astronomers caught the enormous black hole at the center of our galaxy dining on a large “feast”.

On May 13, 2019, the area just outside the black hole’s point of no return became dramatically brighter, as seen in this short video, provided by UCLA research scientist Tuan Do, from his observations at the at the W.M. Keck Observatory in Hawaii.

Above, rendering of a star called S0-2 orbiting the supermassive black hole at the center of the Milky Way. It did not fall in, but its close approach could be one reason for the black hole’s growing appetite. Image credit Nicolle Fuller/National Science Foundation.

The enormous black hole at the center of our galaxy is having an unusually large meal of interstellar gas and dust, and researchers don’t yet understand why.

“We have never seen anything like this in the 24 years we have studied the supermassive black hole,” said Andrea Ghez, UCLA professor of physics and astronomy and a co-senior author of the research. “It’s usually a pretty quiet, wimpy black hole on a diet. We don’t know what is driving this big feast.”

A paper about the study, led by the UCLA Galactic Center Group, which Ghez heads, is published today in Astrophysical Journal Letters.

The researchers analyzed more than 13,000 observations of the black hole from 133 nights since 2003. The images were gathered by the W.M. Keck Observatory in Hawaii and the European Southern Observatory’s Very Large Telescope in Chile. The team found that on May 13, the area just outside the black hole’s “point of no return” (so called because once matter enters, it can never escape) was twice as bright as the next-brightest observation.

They also observed large changes on two other nights this year; all three of those changes were “unprecedented,” Ghez said.