These are the Regions for Landing Next Americans on Moon

These are the Regions for Landing Next Americans on Moon NASA selects the regions for landing next Americans on Moon, in 2026.

NASA has announced the selection of 13 regions near the Moon’s South Pole as candidate landing regions for Artemis III, the first crewed mission to the Moon’s surface since 1972. The visuals here show the locations of all 13 regions. 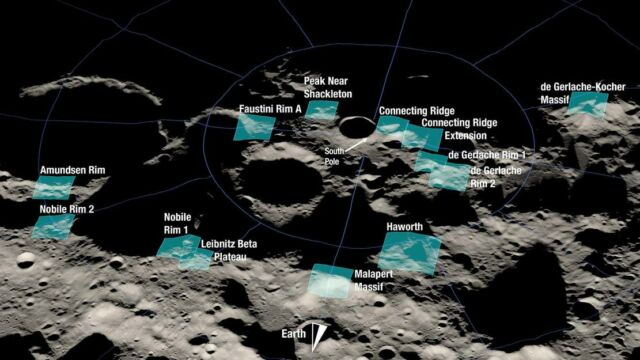 Shown here is a rendering of 13 candidate landing regions for Artemis III. Each region is approximately 9.3 by 9.3 miles (15 by 15 kilometers). A landing site is a location within those regions with an approximate 328-foot (100-meter) radius.  Credits: NASA

“Selecting these regions means we are one giant leap closer to returning humans to the Moon for the first time since Apollo,” said Mark Kirasich, deputy associate administrator for the Artemis Campaign Development Division at NASA Headquarters in Washington. “When we do, it will be unlike any mission that’s come before as astronauts venture into dark areas previously unexplored by humans and lay the groundwork for future long-term stays.”