Why the moon has TWO faces?

Home/Posts/SCIENCES/Astronomy/Why the moon has TWO faces?
Previous Next

Why the moon has TWO faces? 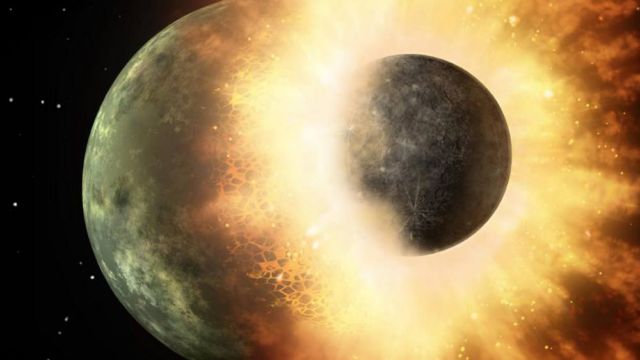 Scientists now think a dwarf planet or a second moon smashed into the far side of the Moon and caused big craters.

The stark difference between the Moon’s heavily-cratered farside and the lower-lying open basins of the Earth-facing nearside has puzzled scientists for decades.

Now, new evidence about the Moon’s crust suggests the differences were caused by a wayward dwarf planet colliding with the Moon in the early history of the solar system. A report on the new research has been published in AGU’s Journal of Geophysical Research: Planets.

Above, artist’s depiction of a collision between two planetary bodies. New research suggests the stark difference between the Moon’s heavily-cratered farside and the lower-lying open basins of the nearside were caused by a wayward dwarf planet colliding with the Moon in the early history of the solar system.  Credit: NASA/JPL-Caltech.

The mystery of the Moon’s two faces began in the Apollo era when the first views of its farside revealed the surprising differences. Measurements made by the Gravity Recovery and Interior Laboratory (GRAIL) mission in 2012 filled in more details about the structure of the Moon — including how its crust is thicker and includes an extra layer of material on its farside.

There are a number of ideas that have been used to try and explain the Moon’s asymmetry. One is that there were once two moons orbiting Earth and they merged in the very early days of the Moon’s formation. Another idea is that a large body, perhaps a young dwarf planet, found itself in an orbit around the Sun that put it on a collision course with the Moon. This latter giant impact idea would have happened somewhat later than a merging-moons scenario and after the Moon had formed a solid crust, said Meng Hua Zhu of the Space Science Institute at Macau University of Science and Technology and lead author of the new study. Signs of such an impact should be visible in the structure of the lunar crust today. 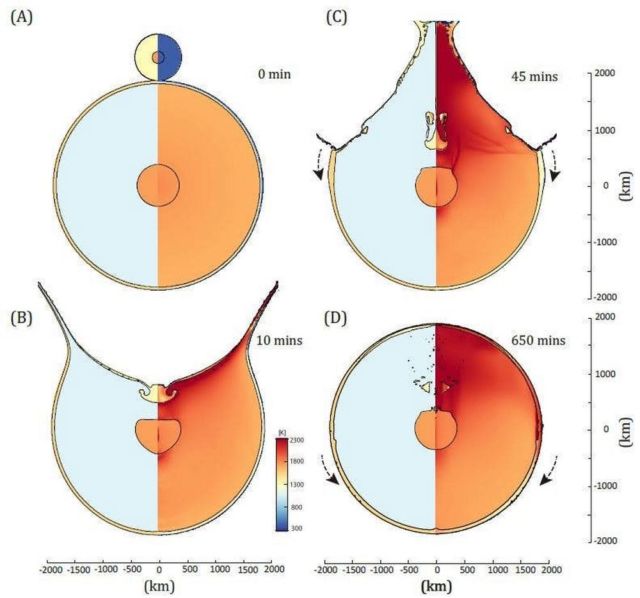 <small|>The basin-forming process for an impactor 780 kilometers in diameter (with a 200-kilometer diameter of iron core) with an impact velocity of 14,000 miles per hour (22,500 kph). In each panel, the left halves represent the materials used in the model: gabbroic anorthosite (pale green), dunite (blue), and iron (orange) represent the lunar crust, mantle, and core, respectively. The gabbroic anorthosite (pale yellow) also represents the impactor material. The right halves represent the temperature variation during the impact process. The arrows in (C) and (D) represent the local materials that were moved and formed the new crust together with deposits of material that was blasted from the impact.  Credit: JGR: Planets/Zhu et al. 2019/AGU.

“The detailed gravity data obtained by GRAIL has given new insight into the structure of the lunar crust underneath the surface,” Zhu said.