Collision may have Formed the Moon in Hours

Collision may have Formed the Moon in Hours 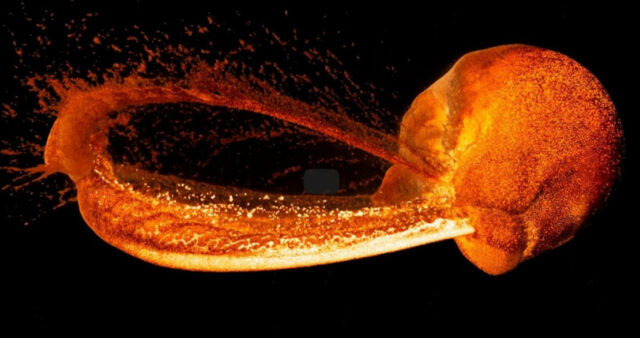 New simulation reveal that a collision may have formed the Moon in hours.

A new simulation by NASA and Durham University scientists, offers a different theory for the Moon’s origin:

The Moon may have formed in a matter of hours, when material from Earth and a Mars-sized body blasted directly into orbit after impact.

Billions of years ago, a version of our Earth that looks very different than the one we live on today was hit by an object about the size of Mars, called Theia – and out of that collision the Moon was formed. How exactly that formation occurred is a scientific puzzle researchers have studied for decades, without a conclusive answer.

Most theories claim the Moon formed out of the debris of this collision, coalescing in orbit over months or years. A new simulation puts forth a different theory – the Moon may have formed immediately, in a matter of hours, when material from the Earth and Theia was launched directly into orbit after the impact.

“This opens up a whole new range of possible starting places for the Moon’s evolution,” said Jacob Kegerreis, a postdoctoral researcher at NASA’s Ames Research Center in California’s Silicon Valley, and lead author of the paper on these results published in The Astrophysical Journal Letters. “We went into this project not knowing exactly what the outcomes of these high-resolution simulations would be. So, on top of the big eye-opener that standard resolutions can give you misleading answers, it was extra exciting that the new results could include a tantalisingly Moon-like satellite in orbit.”